Ardipithecus is an extinct hominid which lived approximately 4 million to 2 million years ago – from the Late Pliocene Period through the Early Pleistocene Period. It was first discovered in the early 1990s by Tim White and his research team in the Middle Awash river valley of Ethiopia. Tim White would name it Ardipithecus in 1995 – a name which means “ground ape.”

One of the most fascinating facts about Ardipithecus is that it was once believed to be a direct relative of modern humans. However, subsequent discoveries have disproved this hypothesis. It is currently believed that Homo habilis (one of the earliest members of the genus Homo) descended from a segment of the Australopithecus population. If that’s true, then Ardipithecus is not a direct relative to Homo Sapiens.

Ardipithecus was approximately 4 feet tall and weighed around 75 pounds. Which would have made it about the height of an average 8 year, although it probably would’ve weighed quite a bit more than the average 8-year-old does today.

Different Ardipithecus pictures show this species in different ways. For instance, some pictures show these hominids walking on all fours, while others show them walking upright. Currently, it isn’t known whether they walked upright all of the time or if they walked on their hands part of the time. Examination of its fossils seems to indicate that it had both bipedal and tree-climbing adaptations. To confuse the issue even more, its fossils were found in an area that was heavily wooded during the time in which she lived. This too would suggest tree-climbing behavior. 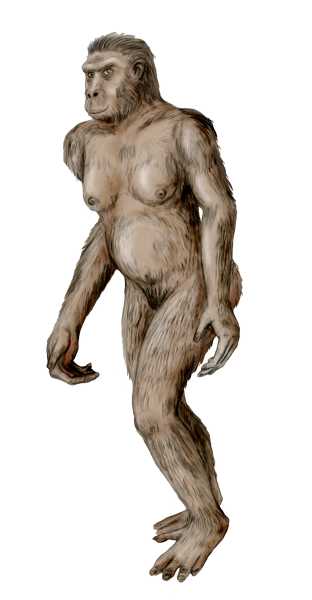