Proconsul is an extinct primate which lived approximately 23 to 17 million years ago during the Early Miocene Period. It was first discovered in 1909 by a gold prospector in Western Kenya, Africa. However, it wouldn’t be named until 1933 when Arthur Hopwood decided to give it the name Proconsul – a name which means “before Consul” (Consul was a famous ape at the time).

One of the most bizarre facts about Proconsul is its name. It was named after Consul, a pair of famous circus chimpanzees which had performed in Paris and London at the beginning of the 20th century. These chimps were so famous, that all of the performing monkeys during the 1930s were often called Consul. Which is probably why Arthur Hopwood decided to use the name.

If you look carefully at Proconsul pictures, then you’ll likely notice that it doesn’t have a tail. That’s because paleontologists haven’t found the fossils of one yet and this primate may not have had one. Another thing you’ll likely notice is this primate looks very much like a cross between a great ape and a chimpanzee. Which has caused some confusion about its scientific classification.

Scientists aren’t really sure if this animal should be classified as a primate or as an ape. That’s because this animal evolved during a time when primitive monkeys and apes began to diverge from a common ancestor. Proconsul had the features of both an ape and a primate. For instance, it had flexible hands like that of a primate, but it also had no tail – which is indicative of being an ape.

Proconsul was approximately 3 to 5 feet long and weighed around 25 to 100 pounds. It is believed that it lived on a diet of plants and fruits – which it probably secured while living in trees. It may have also lived on insects like many monkeys do today.

Whether Proconsul is an ape or a primate needs to be known for more than just classification. If it was truly one of the first apes, then that means that it is possible that it could have spawned the Hominids and have been a distant ancestor of mankind. However, we won’t know until more fossils are found and more research has been completed. 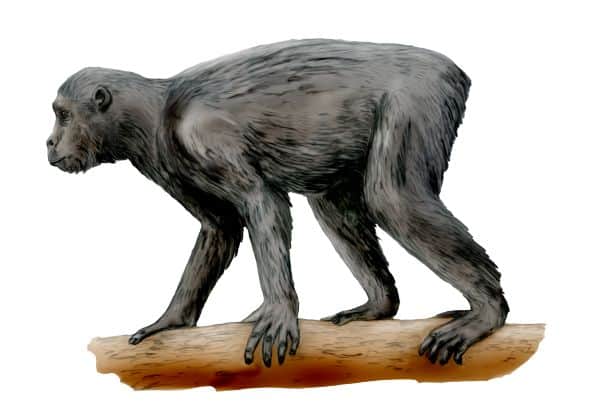